While there are many programs and community outreach opportunities that the Carbondale Fire District participates in, we wanted to shine some light on the Initial Attack Program that the department started over 25 years ago. This program was the first of its kind and since its inception, many other departments around the area have also adopted this tactic. As summertime brings about more chances for a wildfire to spark and an increase in call volume, they are able to bring on additional staffing for this to be an effective program for the community.

What is the Initial Attack Program? 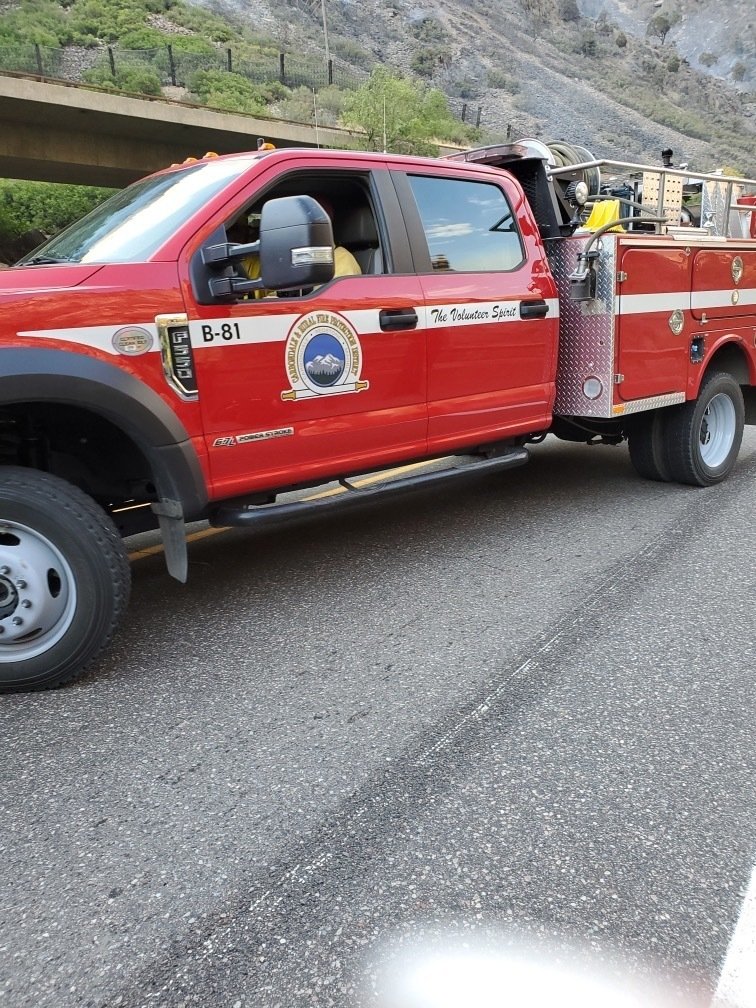 Carbondale Fire District’s initial attack mission is to keep small fires small. One of the ways they abide by this mission statement is through their Initial Attack Program. This program allows for two staffed brush trucks to patrol everywhere from Marble to Missouri Heights, 7 days a week. The trucks are staffed with trained firefighters and EMTs that are not only patrolling for wildfires, they are also ready to assist in any medical or trauma emergency that occurs. The idea behind this program is that these crews are able to be the first on the scene (within minutes of a call) in any situation to provide the best chance of saving lives.

A majority of the time the teams are out patrolling dispersed camping sites and putting out campfires that people have left smoldering behind, checking out lighting strike areas, and any human-caused fires (even accidental such as a transformer blowing). The teams debrief in the morning, they check to make sure their brush trucks are in working order and begin by surveying any areas that might have seen lightning the night before. They utilize lightning maps and activity levels to see where these hot spots might be. A lightning strike can cause the ground to smolder or cause a small tree to burn, so the crews inspect the area and put out any potential risk for wildfire spread. In the afternoon, they are out patrolling districts and subdivisions as this is a time when the burn period picks up. With hot, dry, and windy conditions, there are more opportunities for small fires to start (especially this summer when we are experiencing extreme drought conditions).

Stories from the Crew

With the recent fires happening around our valley, the initial attack crew has been busy assisting with calls and being the first to arrive on the scene. Here are some recounts from the Red Canyon Fire and Grizzly Creek Fire.

The initial attack crew was patrolling up in Missouri Heights that afternoon when the call came in regarding fire activity in the Fischer Creek/Red Canyon area. Pablo and his partner were patrolling the north end of the District that afternoon. They were paged to the structure fire – that turned out to be a wildland fire – and ended up being the first on the scene. Pablo said as they were driving to the fire, they could see the flame lengths were already over 50 feet and there was a wall of fire at least 200 yards long, rolling down the hill (Fire doesn’t typically move downhill, this fire behavior is extremely radical). As they were driving to the scene they remembered that there are cabins close by that are in immediate danger of this blaze, so Pablo and his partner had to act fast. There were people in the cabins, gathering their things and trying to evacuate. Pablo and his partner were working to get everyone out as safely and quickly as possible. At this point, he recounts that the fire was about to jump the road and they could feel the heat from the blaze – almost hot enough to blister the paint on the truck. The fire created an incredibly intense noise, almost resembling a locomotive barreling through the area. The crew said that the fire was “zooming downhill” at a faster rate than you would even want to drive away from it.

The crews had to act fast. There were multiple risks and hazards in the fire path, including the Xcel Power Substation (which powers all of Vail and Eagle County), and the fire was burning down toward a natural gas pumping station. A 20-acre fire can overwhelm a single brush truck pretty quickly, so the Initial Attack crew needed air support. Fortunately, due to the Grizzly Creek fire just a few miles away, there were crews ready to assist. 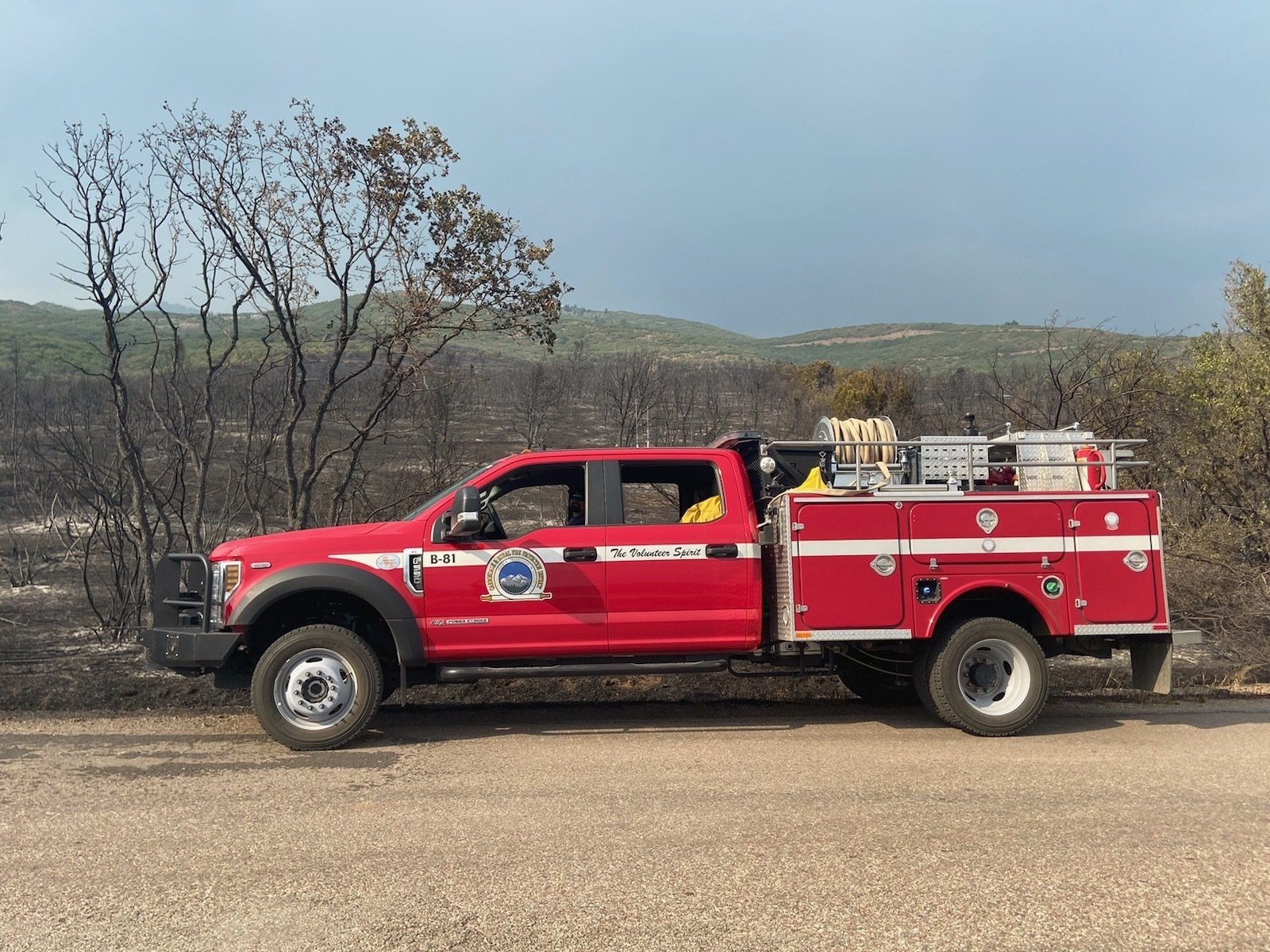 The crews talk about this fire as an “absolutely surreal experience” and kept saying that this fire behavior was unlike anything they had seen before. They were very grateful for the quick and hardworking responses of the other crews that came to help fight the fire. Fortunately, with the fast thinking and efforts by all involved, they were able to contain the blaze within four hours. They used different techniques to extinguish the fire – they boxed in the fire with flame retardant to slow the progression, had helicopters drop water buckets on the flames, and finally had ground crews go in to hand test the area to make sure the fire was out.

What a lot of people don’t realize is an integral part of the “boots on the ground” crews. These crews go into the area after the fire has been contained to hand check and make sure there is no threat of the fire starting again. The fire retardant or water drops can dry out creating an opportunity for the sparks to ignite again, especially if the conditions are hot and dry. It takes a lot of manpower to walk and inspect the fire area. The crews are literally walking side by side feeling the ground with their hands to make sure there is no heat radiating off and they extinguish any hot spots that might arise.

The Carbondale Fire District was the first mutual aid crew on the scene. They actually saw the smoke rise up above the ridge in Carbondale and were already preparing to leave when they received the call. Carbondale Fire Chief Rob Goodwin, said: “I’ve never seen fire behavior in 33 years like we are seeing now.” He was witnessing fire burning downhill at such high speeds with no wind to push them forward and 50-foot flames. “We are having a record drought year which is causing this radical fire behavior.”

If battling this erratic fire behavior was only one obstacle the crews had to deal with in the Glenwood Canyon, they also had to be hyper-aware of their surroundings regarding rockfall. Rob Goodwin and Jenny Cutright recounted the moment they were driving through the canyon with Mike Wagner driving in the vehicle behind them when rocks started tumbling down from above. They had to pick up speed in order to avoid getting crushed by the rocks. They saw a boulder come down right behind them and Mike had smaller rocks pelting the roof of his vehicle. Never a boring day on the job for the fire department!

This just goes to show that there are so many different factors and risks that come with wildfires that don’t end when the fires do. There is a constant need for mud and rock slide mitigation since the vegetation is no longer there to keep everything intact and the effects of high heat and cold water mix to make the ground unstable.

The Initial Attack program helps the Carbondale Fire District to stick to their mission statement each and every day. It is something they strongly believe in and aim to protect everyone in our community, and beyond because they simply want to help. If you have any questions or would like more information on the Initial Attack Program, please reach out to your friends at the Carbondale Fire District.